By Stewart Green
Linda Richardson led the guest list of Sandbach Singers for this week’s Sandbach Concert Series at St Mary’s Church on Wednesday.
The local singers were joined by the Halle Youth Choir conducted by Richard Wilberforce from Manchester who provided a selection of classical melodies from ‘Birthday Madrigals’ by John Ritter to ‘Over the Hill, Over Dale’ with local opera singer Linda Richardson singing George Gershwin’s ‘Summertime’ and classical favourite ‘O Mio Babbino Caro’ during the second half of the concert.
‘O Mio Babbino Caro’ last made an appearance at St Marys when Staffordshire singer Denise Leigh sang at a charity concert in the town. Linda then sang ‘I could have Danced All Night’ from My Fair Lady before handing back to the Halle Youth Choir for the finale.
For me it was the first half “Spotlight Concert” for local choirs that most impressed this reviewer. The show opened with the Nantwich Young Voices singing the Monkees hit ‘I’m a Believer’ and ‘What shall we do with the drunken Sailor’ with ‘We are the young’ ending their selection. Next on the bill were pupils from the Elworth C of E School who performed two songs along with actions and then the final young group in the first half were the Sandbach High School Chamber Choir who left behind their classical slow tunes to present an upbeat session with the number one hit from McFly, ‘It’s all About You’ followed by ‘Shadowland’ from the musical The Lion King and finally ‘Some Nights’.
The evening was enjoyed by over 160 audience members including the Mayors of Sandbach, Cheshire East and Alsager.
Next month’s concert features the Tempest Flute Trio three entertaining players who met at the Royal Northern Collage of Music in Manchester.
Tickets for the next show on the 28 May 2014 are £8.50 (Adults), £7 (Concessions), £3 (School Children), £20 (Family Ticket) and are available at Demeter Wholefoods and Bramwells Opticians in Sandbach as well as on the door with further details available via the website at www.sandbach-concert-series.co.uk .
Photo: Conductor of the Halle Youth Choir / Linda Richardson / Pianist
Posted by lol at 01:49 No comments:

Sophie Rosa stars in Sandbach Concert Series October Concert
On Wednesday 30th October, Sandbach concert-goers made their way to St Mary’s Church Hall for an evening of outstanding performances, by both virtuoso violinist Sophie Rosa as well as the talented young musicians from the local areas.
The evening started with a Spotlight Concert with an interesting non purposeful spin that all the young performers were female, from local areas of Sandbach, Congleton and Shavington. The standard that the girls set was extremely high, and I’m sure that anyone who heard them play would agree. The instruments played in the spotlight concert included violin and clarinet. 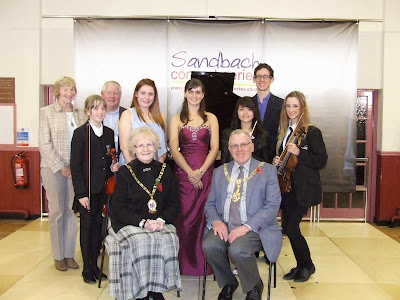 During the interval artwork was displayed by a young local artist Alex Robinson whose work is available to view online at: alexrobinsonphotography2.weebly.com.
After the interval, the concert commenced with virtuoso violinist: Sophie Rosa. Originally from Cheshire, Sophie is rapidly emerging as one of the UK's most exciting young violinists having won ‘Audience Prize in the prestigious 2nd Manchester International Violin Competition where she performed with the Royal Liverpool Philharmonic Orchestra and was recorded for Classic FM Radio Station. Sophie was the First Prize winner of the Lions European Youth Competition in 2008 and was a strings finalist of BBC Young Musician of the Year 2006.

Her accompanist: Benjamin Powell is also a very established musician. He has performed across the UK and Europe in venues including the Royal Festival Hall, Queen Elizabeth Hall, Wigmore Hall, Snape Maltings, Britten Studio and Bridgewater Hall. Benjamin was the winner of the British Contemporary Piano Competition 2010.
Together the duo entertained the audience with a range of music from the violin and piano repertoire performed with true musicianship and enthusiasm. It was a concert enjoyed by all.

See the website www.sandbachconcertseries.com for our latest concert information.

Held at St Mary's Church Hall, the concert also included an art exhibition by Ged Mitchell and a successful raffle in aid of the Mutliple Sclerosis Society, raising a total of £104.


A range of talented young musicians performed brilliantly in the spotlight concert and the hall was buzzing with a great sense of community spirit.. After refreshments from the bar, lovely raffle prizes and an excellent art exhibition showcasing various landscapes of Sandbach, the Courtois Trombones performed a dynamic and enjoyable repertoire for the concert.

Overall it was a delightfull concert to finish the series this year. The next concert will be on Wednesday 26th February featuring the Tango5 - hope to see you then!

Review by Ruby Scott
Posted by harpyness at 06:21 No comments:

Harps struck a chord at concert 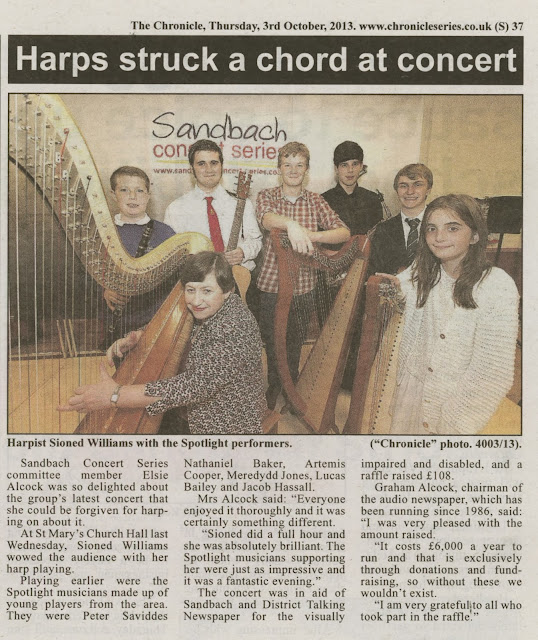 Posted by harpyness at 01:36 No comments:

The last Wednesday of the month at 7 pm in Sandbach means just one thing - the Concert.
These musical treats are enjoyed with great relish, be it the popular Spotlight concert, featuring local young musicians, or the professional musicians' one hour concert after the interval.

The 4th season opened on Wed 25th Sept with harpist Sioned Williams as principal soloist, preceded by young Spotlight musicians whose expertise clearly reflected their hard work and dedication. What a delight to hear such a variety of music ranging from harp solos to the young tenor singing Schumann, in German! 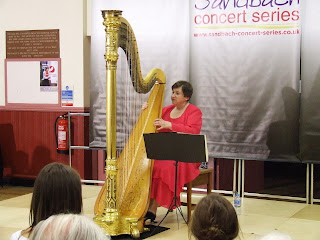 As chief harpist in the BBC Symphony Orchestra, Sioned had virtually come straight from the hectic schedule of the Proms, not to mention all her other musical commitments. Covering English music from the 16th - 20th centuries, Sioned's inspirational playing created a joyous evening, enhanced by her explanation of each piece. Particularly poignant was the story of the Welsh valley that was submerged to provide water for a nearby city.  One audience comment after the concert summed up the evening: " It's the first time I've heard music and really understood what it was all about".  Then there was the couple attending their first concert who bought season tickets for the series before the evening's end.

But above all, the sight of Sioned, sitting surrounded by young musicians after the concert, and no doubt quite exhausted, chatting and probably giving them the benefit of her experience, seemed to "say it all"!
Sylvia Scott
Posted by harpyness at 05:23 No comments:


Well, we have now come to the end of the third season on Sandbach Concert Series, and what a fantastic series it has been! 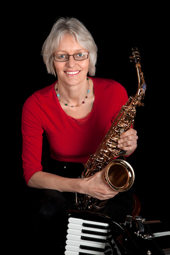 Concerts explored various genres, from the delights of our very own Lauren Scott and her duet partner Anna-Clare Monk (as a harp and soprano duo) to Foden’s Brass Band, Soloists from Northern Chamber Orchestra, Musicians from the Hallé Orchestra as well as many more!

This season’s finale concert was performed by Karen Street and Andy Tweed’s saxophone and accordion duo. Unusual combination I hear you say? Indeed, but what a beautiful sound they made, with folk tunes including The Keel Row and Jack Tar’s Return as well as some pieces that Karen had written herself. The audience were left in awe of the talented musicians as they entertained us through-out the concert. The accordion is not an instrument that you may hear played that often anymore, aware of this, Karen explained how it worked and guided the audience through the repertoire selected for this concert's programme. The duo performed effortlessly, which made for a delightful summers evening of entertainment. 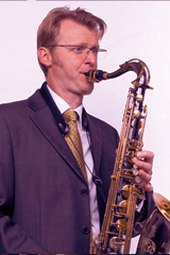 As usual, the young musicians that performed in the spotlight concert wowed the audience with their passion and flare. Children and young people of all abilities took to the stage to perform and show off their talent. Their repertoire ranged from exam pieces, popular classical pieces, as well as a composition written and performed by a talented musician from Sandbach Boys School.

After a very successful three seasons, (and a fourth still to come!) I would like to take this opportunity to thank everyone for their support of the concert series, but most of all to thank Andy Scott and Lauren Scott, who have worked really hard not only to establish Sandbach Concert Series but to maintain its success.

The fourth season will start on Wednesday 25th September at 7pm, at St Mary’s Church Hall, with Sioned Williams, who is principal harpist with the BBC Symphony Orchestra. We look forward to seeing you there! 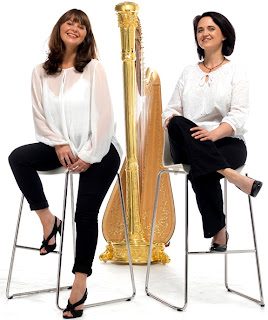 On a cold wintery evening in March, supporters of the Sandbach Concert Series made their way to St. Mary’s Church Hall in Sandbach for a wonderful evening of music.

Violinists and singers from Sandbach School and Sandbach High School starred in the spotlight concert at this month’s Concert Series. The talented children played in ensembles as well as doing solos and showed no sign of nerves when they stepped onto the stage to perform (some of them at the young age of just 11 years old!). The concert also featured an acapella vocal group from the girl’s school who were exceptional; their set featured a version of the modern pop song ‘Some Nights’ by Fun.

After the spotlight concert there is an interval with the opportunity to socialise and view the artwork of a local talented artists, this month featuring the work of Ryan Connolly. There is also a raffle at every concert to raise money for local charities. This month’s concert was supporting ‘Friends of Sandbach Station’ and ‘Friends of Elworth Park’.

The second half featured a Soprano and Harp Duo formed in 2012. The duo consists of Anna-Clare Monk (soprano) and Lauren Scott (harp). Their repertoire spans old and new music from Purcell to award-winning composer Andy Scott. The duo play with an instinctive musical partnership though they have only been working together for a year. Hardly surprising as they were school friends who first met at Chethams School of Music. The duo enchanted the audience with their beautiful music.

Sandbach Concert Series is a non-profit Arts organization run entirely by volunteers. With 8 concerts a year at St Mary’s Hall, a deliberately early start and finish time to our concerts, as well as reasonable ticket prices it’s aim is to encourage more families to attend classical music concerts. The structure of the concerts; a half hour spotlight concert by young musicians, followed by a half hour interval with an art exhibition, and then a one hour concert by the main artist is unique in the UK.
This blog is for news & reviews.
Please visit our main website for information about our concerts. 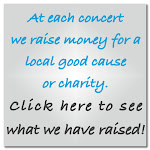